Asia-Pacific traders are likely to see a risk-averse open in today’s session after the sentiment-linked Australian Dollar fell versus the US Dollar. China’s Caixin purchasing managers’ index is set to cross the wires today for the services sector, with analysts expecting a print of 51.7 for December. That would be down slightly from 52.1 in November. The Caixin manufacturing PMI released earlier this week rose to 50.9 from 49.9 for December. A better-than-expected print may revive some Aussie Dollar strength.

A wave of risk aversion roiled through US markets overnight after the Federal Reserve’s minutes from the December FOMC meeting crossed the wires. That revealed a more hawkish policy outlook, with the prospects of three rate hikes next year strengthening. In the fight against inflation, some voting members also expressed the possibility of reducing the central bank’s balance sheet shortly after rates lift-off. The tech-heavy Nasdaq 100 index shed over 3% on the news, while the cyclically-sensitive Dow Jones Industrial Average lost just over 1%.

Bitcoin dropped as well, which is unsurprising given the asset’s speculative nature. Oil prices, however, were largely unchanged despite additional restrictions from several countries aimed at culling Omicron’s spread. Hong Kong policymakers on Wednesday moved to ban all commercial flights from eight countries, including the United States, Australia and Britain. Most Asian countries have managed to keep the new variant suppressed relative to the Western world, but that will likely come at an economic cost.

Those increased social distancing and travel restrictions may be rolled back in the coming weeks if Omicron proves to be less deadly, as many health experts are already suggesting. However, one of the primary vaccines used through Asia (Sinovac) may not be as effective, even with a booster shot, according to an unpublished Hong Kong University study. China’s tech-heavy CSI 300 index dropped over 1% on Wednesday, while a broadly weaker Japanese Yen supported the Nikkei 225.

AUD/USD trimmed gains overnight and went into the red, with the falling 50-day Simple Moving Average (SMA) pressuring prices. The 26-day Exponential Moving Average (EMA) may provide support along with the 38.2% Fibonacci retracement. However, the MACD oscillator appears to be shifting into a bearish stance, with the MACD on track to cross below its signal and center lines. A break lower may see a move down near the psychologically imposing 0.7100 level. 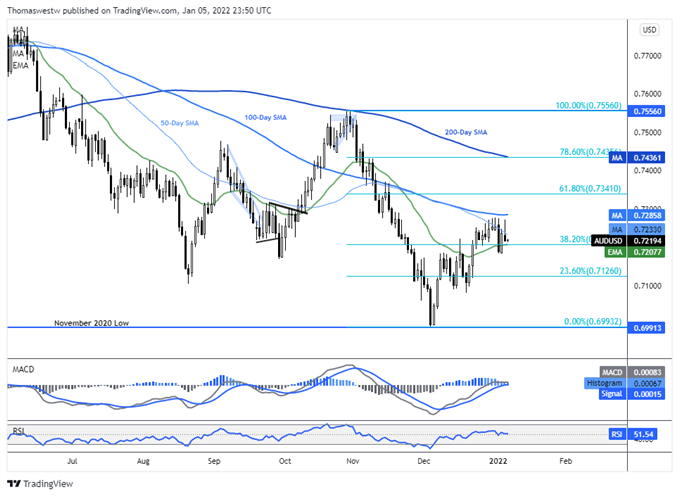