BitFuFu and Bitdeer will be the first cloud mining platforms to list on U.S. stock exchanges this year, and if their current valuations are anything to go by, investors are willing to pay up for their “phenomenal” growth prospects, even as the crypto market has pulled away from its peaks.

The miners have a similar origin story: Both were born out of the world’s largest crypto mining rig manufacturer, China-based Bitmain, and both are going public in the U.S. via special purpose acquisition companies (SPACs), with somewhat similar business models. On top of that, both have very credible management teams. One even has the “Elon Musk of crypto” as the company’s founder and chairman.

This article is part of CoinDesk’s Mining Week series

Moreover, the two companies promise exceptional growth rates, both in profitability and in operations, for the shareholders who are willing to pay a premium for a piece of these soon-to-be public miners. Bitdeer expects to increase its revenue 54% in 2022 from the previous year and boost its total hashrate by 133%. Meanwhile, BitFuFu forecasts growing both its revenue and hashrate by about 230% each in 2022 from 2021.

But the way these two companies came into existence was anything but smooth, and their valuations, higher relative to some of their publicly traded peers, have drawn the attention of some analysts.

Read More: What Is Cloud Mining?

Throughout 2020, Bitmain’s two co-founders, Ketuan “Micree” Zhan and Jihan Wu, were fighting for control of one of the world’s largest crypto firms. The struggle, which once resulted in physical violence, ended with an amicable separation in January 2021: Zhan kept Bitmain’s design and manufacturing business, buying Wu’s share, whereas Wu kept Bitdeer.

Fast forward to April of that year, and Zhan’s Bitmain invested an undisclosed amount in BitFuFu, a mining platform founded in December 2020.

Ahead of BitFuFu’s third quarter Nasdaq listing, the miner boasts a close partnership with Bitmain which includes benefits in sourcing equipment and close cooperation in the operation and maintenance of machines. The two have signed a 10-year hosting agreement and are planning to build 300 megawatts of mining capacity.

BitFuFu claims that it is the only cloud-mining strategic partner of Bitmain, as of January of this year, and it had $70 million in private investment in public equity (PIPE) financing led by Bitmain and mining pool Antpool, according to a presentation.

Meanwhile, Bitdeer plans to list on the Nasdaq at the end of the first quarter. Both firms boast a diversified business model; they mine bitcoin of their own, provide cloud hashrate to customers, and host third-party miners, according to their respective presentations. BitFuFu also sells outdated mining rigs in the second-hand market, it said in its presentation.

Today, BitFuFu counts 3 exahash/second (EH/S) in hashrate, a measure of computing power on the Bitcoin network, compared with Bitdeer’s 8.6 EH/s. Together, they account for about 5.6% of the total network’s hashrate. Bitcoin’s global hashrate was about 207 EH/s as of March 21, according to data analytics firm Glassnode.

BitFuFu plans to increase its managed hashrate to 10 EH/s by the end of 2022, with 4.5 EH/s coming from self-owned operations and 5.5 EH/s from third parties, according to a press release. This represents a 230% hashrate increase in 2022 compared to 2021.

In the same time period, Bitdeer is looking at 20 EH/s, 13.1 EH/s of which will be proprietary, according to a filing with the U.S. Securities and Exchange Commission (SEC). That’s a 133% gain in total hashrate in 2022 from 8.6 EH/s in 2021. Bitdeer’s facilities are spread across five sites located in the U.S. and Norway. Half of the energy it uses comes from carbon-neutral sources, according to the filing.

BitFuFu, whose corporate name is Finfront Holding Company, has facilities in the U.S. and Canada. It set up operations in Kazakhstan in 2021, which it later abandoned following energy shortages, moving the hashrate to the U.S.

Cloud mining has proven a popular model with retail and institutional investors, so much so that Bitdeer said that its hosting plans were sold out for several weeks starting Jan. 31. “We may not have any hosting plans any time soon,” and “plans are just on high demand,” said a customer service representative on Bitdeer’s official English channel on Jan. 31. Bitdeer added new plans recently, and on average, 39% of the available options have been sold as of March 22.

Cloud mining allows investors to participate in the bitcoin network without owning and operating the equipment themselves. Firms run their own data centers or partner with other miners, leasing the equipment through an online platform, giving the users a choice as to what machines they won’t lease and what mining pools they want to mine with.

One of the ways the platforms can make money, is from the difference between the higher retail prices that they charge their clients and the lower bulk prices at which they buy electricity and equipment.

One caveat with overseas companies that offer cloud mining services and hashrate tokens is that they need to be careful when coming to the West, where securities laws are more well defined and regulators have a track record of firm actions, said Ethan Vera, chief operating officer and co-founder of Luxor Technology.

“As we saw with the recent BlockFi settlement, the regulators are becoming quite aware of the ecosystem,” Vera said. “These types of mining contracts may pass as securities, and if they are will need to be properly regulated, or else will pose significant regulatory risk for their investors,” he added.

However, given the nature of the business of cloud mining, it’s possible the miners could be spared some regulatory scrutiny. “As hash rate hosting marketplaces with a distributed portfolio of mining data centers, they can democratize access via cloud mining and, to a certain extent, be less directly subject to regulatory risks of specific jurisdictions,” China Tonghai Securities’ Pau said.

Regulatory risks aside, with high demand for cloud mining and the two companies’ abilities to continue to fuel growth, it’s no surprise that stock market investors are willing to pay a premium for miners coming into an already saturated industry, even when the crypto market has pulled away from its November 2021 peaks.

Both firms will be going public through SPACs. Also known as blank check companies, these firms have no commercial operations and are formed solely for going public. SPACs usually go public via initial public offerings (IPOs) first and then acquire other firms, effectively bringing them to public markets. The deal often involves some people from the acquired company taking seats on the SPAC’s board of directors.

Bitdeer will merge with Blue Safari Corporation (BSGA) at an implied market cap of $4.08 billion, according to a company presentation. The new company will be renamed to Bitdeer and Wu will continue to serve as chairman of Bitdeer’s board, according to SEC filings.

Meanwhile, BitFuFu is going public via Arisz Acquisition Corp. (ARIZ) and the equity was valued at about $1.66 billion, according to a company presentation.

A quick look at how both of the miners’ expected growth in hashrate for 2022 is valued compared to some of the top publicly traded miners reveals that both Bitdeer and BitFuFu are valued slightly higher.

Based on just the self-mining hashrate, the market capitalization to 2022 expected hashrate multiple is around 0.3x for both Bitdeer and BitFuFu, while the top three publicly traded miners range from 0.12x to 0.18x. 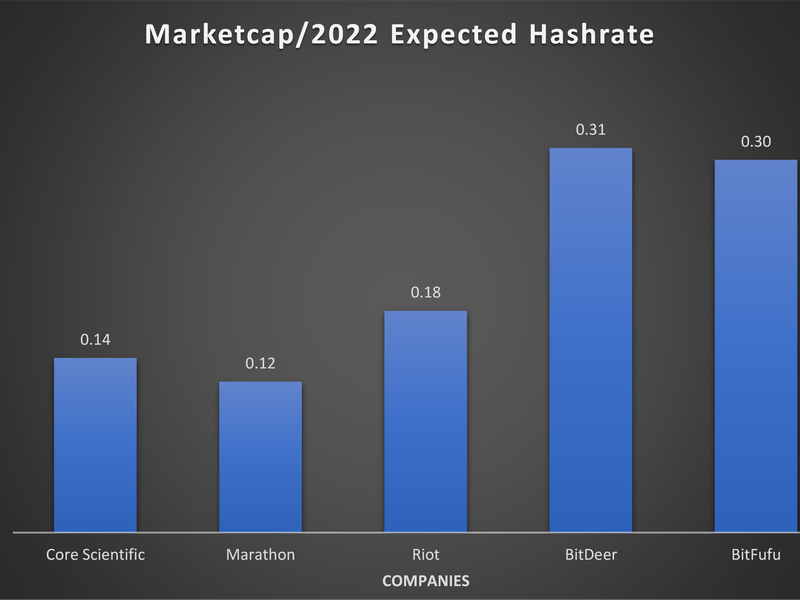 Both Bitdeer and BitFuFu could be seen as “fully valued” compared to current publicly listed miners because of their “incredible” growth rate, superior profit margins and tight relationships with mining rig suppliers, Peter Stoneberg, managing director of crypto mergers and acquisitions firm Architect Partners, told CoinDesk in an interview. It’s the future prospects of companies that drive investment, so if investors see a company is able to fund its future growth, they will “absolutely pay a premium for that growth rate,” Stoneberg added.

The two companies’ shared roots also add to their appeal: Investors will be willing to pay up for companies that originate from a pioneer in the mining sector, Bitmain. The rig manufacturer “is still the centerpiece of the mining industry, and any company related to it, such as BitFuFu and Bitdeer, is strategically positioned to capitalize on favorable procurement opportunities and networks,” said Luxor’s Vera.

Another reason investors are usually willing to pay a premium is if they have faith in the management to build a profitable company. With someone as successful as Jihan Wu, investors are betting on him, Stoneberg said. “Having co-founded Bitmain and starting Matrixport and Bitdeer, it’s a bet on a highly successful and exceptionally well connected entrepreneur,” Stoneberg said.

Stoneberg likened Wu to Tesla’s Elon Musk. Investors are betting on Musk, a successful entrepreneur, when they are investing in Tesla. Wu is a similar case, with investors betting on his stellar track record. “Like Wu, Musk has started three companies that have become unicorns, so he’s a little bit like the Elon Musk of crypto,” Stoneberg added.

Wu and his team will keep a big chunk of the listed firm. After the Bitdeer and Blue Safari merger closes, about 72% of the surviving company’s shares will be held by the founding members of Bitdeer. Around 24% will go to investors, including legendary tech venture capital firm Sequoia, Singapore’s sovereign wealth fund Temasek, IDG Capital and China-focused private equity fund New Horizon, according to the company presentation.

After BitFuFu completes its SPAC merger, 90% of the company will be held by BitFuFu’s shareholders, 4.4% by SPAC public shareholders and 4.2% by PIPE investors. One of the largest mining pools, AntPool, is part of the PIPE financing.

Both miners are going public at a time when crypto and broader markets have pulled back from their peaks while investors have shunned most of the risky assets amid potential interest rate hikes and Russia’s invasion of Ukraine. One miner, Rhodium Enterprises, had to postpone its IPO that was valued at almost $2 billion, due to pullback in the overall market.

Additionally, the downside of going public via SPAC is that historically when a SPAC deal is announced the shares of the public entity surge, then when the deal is completed, they drift lower, according to research by Nasdaq.

“After a merger is announced, stronger valuation differences are priced in, and the distribution of performance widens, with around 25% of SPACs gaining more than 100%, while about 50% of SPACs drift down to record losses versus their common share first trade price, mostly after they complete their business combinations,” the report said.

In fact, Core Scientific, the largest North American public miner by hashrate, also recently went public through a SPAC deal and started trading on Jan. 20. The stock saw extreme volatility in the first month of trading where it swung from more than a 30% decline to 30% gains from its first day’s closing price. The share prices are currently slightly higher than the Jan. 20 closing price.

Such a scenario could play out for both Bitdeer and BitFuFu, at least in the short term, after the miners “de-SPAC” or complete their merges. However, regardless of the short-term volatility and a premium valuation, longer-term investors should keep their eye on the prize, which is their “phenomenal growth rate,” said Stoneberg.

Don’t Call It a Comeback: The Unlikely Rise of Home Bitcoin Mining

Even with the surge in popularity, home bitcoin mining only accounts for a small slice of the industry’s overall pie.

What Does a Crypto Mining Farm Look Like? Striking Photos From Siberia to Spain

CoinDesk reporters traveled across Europe, Asia and North America to capture the diversity of cryptocurrency mining facilities. This piece is part of CoinDesk’s Mining Week.

After Short-Lived Ban, City in Upstate NY Is Still Reckoning With Crypto Miners

Cities across the U.S. are grappling with what it means to have cryptocurrency mining operations in their communities. Plattsburgh offers a sobering case study.