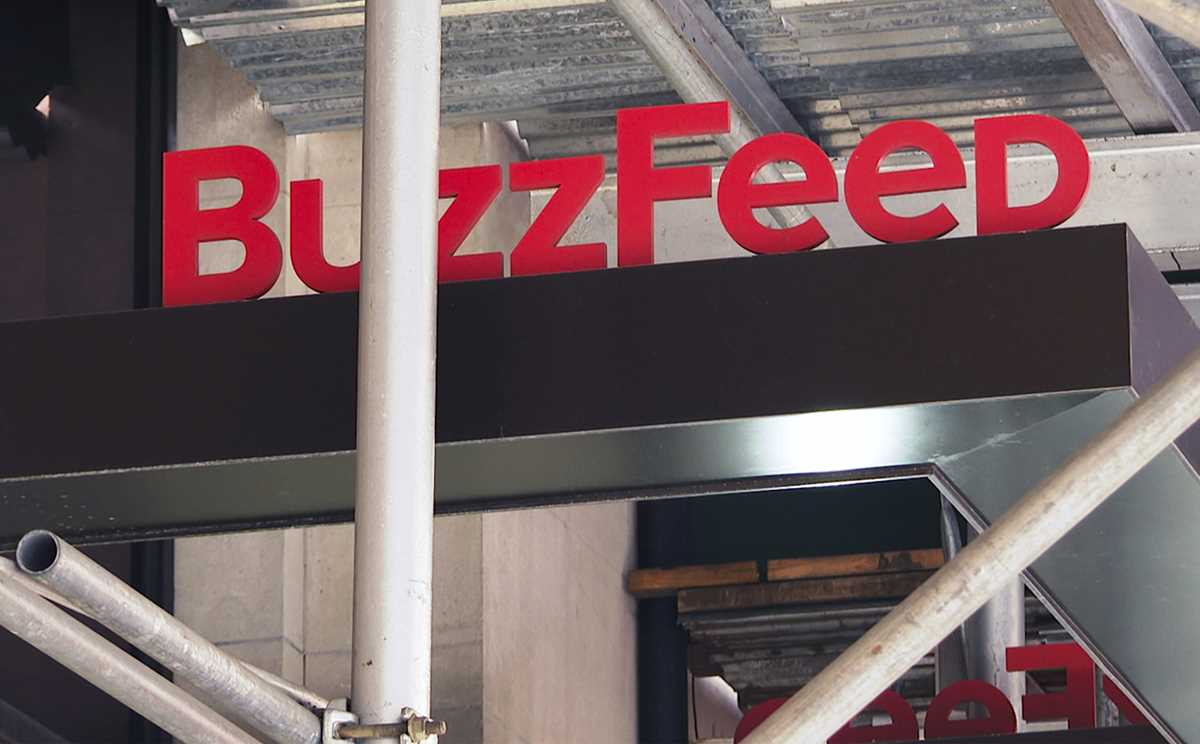 The entrance to BuzzFeed in New York is seen on Nov. 19, 2020. In news announced Tuesday, March 22, 2022, BuzzFeed is reorienting and shrinking its news division as the digital media company best known for its lighthearted quizzes strives to increase its profitability. (AP Photo/Ted Shaffrey, File)

BuzzFeed is reorienting and shrinking its news division as the digital media company best known for its lighthearted lists and quizzes strives to increase its profitability.

The New York-based company is offering voluntary buyouts in its high-profile, 100-person newsroom and some top editors are leaving. They include Mark Schoofs, the editor in chief of BuzzFeed News, and deputy editor in chief Tom Namako, who announced a move to NBC News Digital on Tuesday. Ariel Kaminer, the executive editor for investigations, is also leaving.

BuzzFeed News is unprofitable but has won awards, including its first Pulitzer last year, and its staff has been regularly poached by traditional news organizations. BuzzFeed spokesman Matt Mittenthal said about 35 people were eligible for the buyouts, but the company doesn’t expect all of them to take one.

Buyouts will be offered to news staffers on the investigations, inequality, politics and science teams, as BuzzFeed focuses more on big breaking news and lighter content.

“We’ve had freedom to chase wild, impossible stories,” tweeted Rosalind Adams, an investigative reporter at BuzzFeed News. “It’s a sad day to watch @BuzzFeedNews move away from valuing that work.”

Beyond the newsroom buyouts, the company also said it is cutting 1.7% of its staff. In a January filing with securities regulators, Buzzfeed said it had 1,524 U.S. and international employees, so the cuts would amount to roughly 25 people.

BuzzFeed’s shares have dropped more than 40% since the company went public in early December via what’s known as a SPAC, merging with a company that already trades, rather than an IPO.

The company had a solid year in 2021, it reported Tuesday in its earnings release. Its revenue rose 24% to $397.6 million, thanks to increases in e-commerce and ad revenue, and its profit more than doubled, to $25.9 million.

The White House is scared of our country’s lithium supply running out. That’s why Biden issued executive order 14017 to figure out how to expand our lithium production. And this is GREAT news for one company who’s gobbling up land in the lithium-rich Nevada desert.

But it expects revenue to drop in the current quarter if it includes the acquisition of Complex Networks, a group of pop culture sites BuzzFeed acquired last year. The layoffs separate from the news division will come from BuzzFeed Video and the editorial side of Complex.

BuzzFeed also acquired HuffPost in early 2021, and laid off several dozen of its staffers shortly after.

As for the news division, it “will need to get smaller,” and “prioritize the areas of coverage our audience connects with most,” Peretti said in a memo to employees.

On the earnings call, he said that the company needs to make BuzzFeed News “a stronger financial contributor to the larger business,” and doing so will involve focusing on big breaking news, culture and entertainment, celebrities, and “life on the internet.”

7 Pharmaceutical Stocks to Buy For a Healthy Portfolio in 2022

But the Delta variant has kept Covid-19 top of mind for many investors. While it’s true that some pharmaceutical stocks were part of the vaccine race, other players in the space have not performed as well as was hoped. Case in point, as of October 6, 2021, the iShares U.S. Pharmaceuticals ETF (NYSEARCA:IHE) is up only 9.7% in the last 12 months. And if you bought shares of the fund at the beginning of the year, you have no growth to show for your patience.

There are reasons beyond Covid-19 to consider when assessing the disappointing performance of pharmaceutical stocks. One is the current political climate which is making no secret of its desire to reshape the healthcare industry. And it has the pricing practices of “big pharma” firmly in its crosshairs.

However, the pharmaceutical sector is still loaded with quality stocks for investors who are willing to accept the inherent risk. And that’s the focus of this special presentation. In the next few minutes, we’ll take a look at seven pharmaceutical stocks that
are ready to make strong moves forward in 2022.

View the “7 Pharmaceutical Stocks to Buy For a Healthy Portfolio in 2022”.