The Impact Of War And Sanctions

In a post earlier this month (Sanctioning Ourselves), I mentioned how our system’s top names reflected the impact of Russia’s invasion of Ukraine and the subsequent U.S.-led sanctions on Russia:

As regular readers know, our system doesn’t consider the macro picture when selecting its top names. Instead, it gauges stock and options market sentiment to estimate which securities are likely to perform the best over the next six months. Nevertheless, that bottoms-up approach is painting a clear macro picture when you look at our most recent top ten. 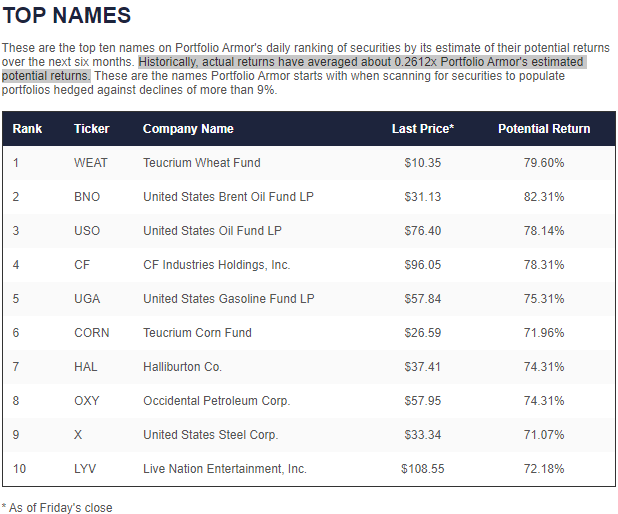 Our number one name on Friday was the Teucrium Wheat Fund (NYSE: WEAT), and two other agricultural names made the list: the Teucrium Corn Fund (NYSE: CORN) and nitrogen fertilizer producer CF Industries Holdings, Inc. (NYSE: CF). Fully half of our top ten were oil and gas names including Haliburton Co. (NYSE: HAL), Occidental Petroleum Corp. (NYSE: OXY), and the United States Gasoline Fund LP (NYSE: UGA). Overall, our nine of our top ten names are bets on food and energy getting more expensive over the next six months.

Shares of the Teucrium Wheat Fund spiked 6.41% on Monday, and it was again the top name in our system on Monday night. The reason for the spike may have been an article over the weekend by the New York Times’s Brazil bureau chief, Jack Nicas, arguing that the war in Ukraine might cause a global food crisis. Nicas summarized the key points of his article in the Twitter thread below.

In Case The Wheat Fund Pulls Back

Ideally, negotiations between Russia and Ukraine lead to peace soon. If so, it’s possible that the dynamic driving wheat prices higher could reverse, causing shares of WEAT to drop. Here’s a way you can hold WEAT now, while limiting your downside risk in the event that happens.

As of Monday’s close, this was the optimal collar to hedge 1,000 shares of WEAT against a greater-than-20% drop by late October, while not capping your possible upside at less than 41% by then. 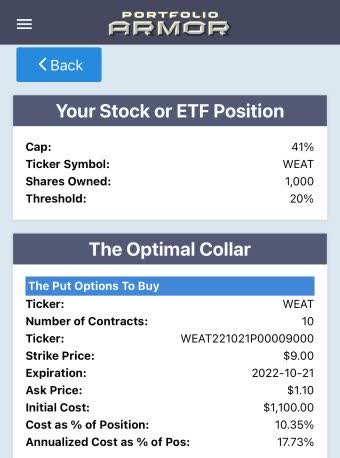 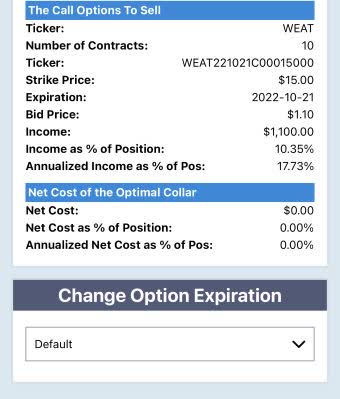 Since the income generated from selling the call leg was equal to the cost of buying the put leg, the net cost of this collar was negative. To be conservative that cost was calculated assuming you bought the puts at the ask and sold the calls at the bid (the worst end of the spread in each case). Since, in practice, you can often buy and sell options at some price between the bid and ask, you likely would have received a net credit when opening this hedge on Monday.

This article was submitted by an external contributor and may not represent the views and opinions of Benzinga.