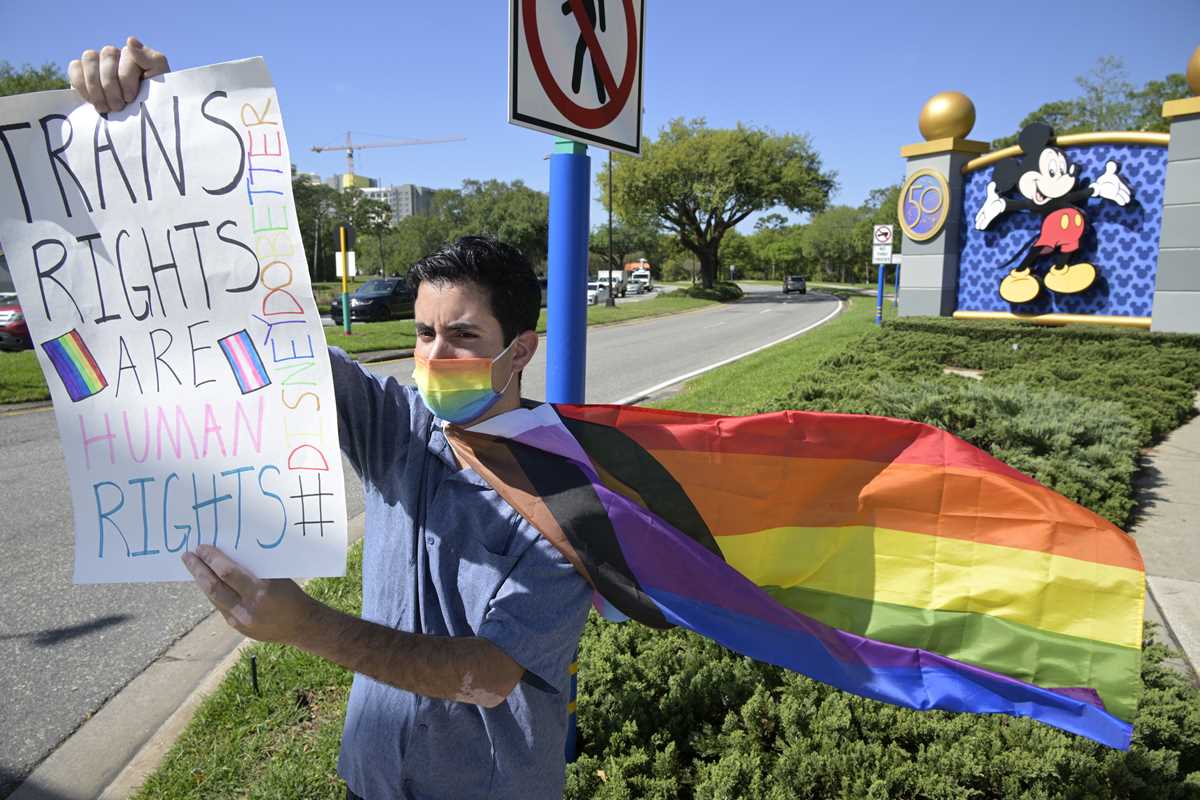 A statue of Walt Disney and Micky Mouse stand near the Cinderella Castle at the Magic Kingdom at Walt Disney World in Lake Buena Vista, Fla. on Jan. 9, 2019. With some workers across the U.S. threatening a walkout Tuesday, March 22, 2022, The Walt Disney Co. finds itself in a balancing act between the expectations of a diverse workforce and demands from an increasingly polarized, politicized marketplace. (AP Photo/John Raoux, File)

ORLANDO, Fla. (AP) — With some workers across the U.S. threatening a walkout Tuesday, The Walt Disney Co. finds itself in a balancing act between the expectations of a diverse workforce and demands from an increasingly polarized, politicized marketplace.

On the one side are LGBTQ advocates and Disney employees calling for a walkout in protest of CEO Bob Chapek’s slow response in publicly criticizing Florida legislation that opponents dubbed as the “Don’t Say Gay” bill. The legislation awaiting the governor’s signature bars instruction on sexual orientation or gender identity in kindergarten through third grade.

On the other are politicians like Republican Gov. Ron DeSantis, who accuse the entertainment conglomerate of bending to cancel culture after a Disney decision to temporarily suspend political contributions in the state. According to Disney’s conservative critics, the company should be in the business of making profits, not pushing an agenda.

It was unclear how many employees would walk out or what might happen to those who do. Union leaders for the tens of thousands of unionized workers at Disney theme parks in Florida and California said they saw no momentum among their members for a walkout, and advised them not to do so because it would defy contractual obligations. Organizers said they expected some participation from production, marketing, IT and other non-unionized jobs.

Evan Power, the Republican Party chairman in Leon County, said he believes a strident minority of Disney employees are pushing the issue and DeSantis has more to gain by taking the side of parents who want more control over education and “sexual conversations” in early grades at school. DeSantis is viewed as a likely Republican presidential candidate in 2024.

“I think it pays dividends with parents across the state of Florida regardless of political divisions,” Power said.

Romualdas Dulskis, a Teamsters official in Orlando whose local represents costumed characters who portray Mickey Mouse, Cinderella and Stich at Walt Disney world, plus bus drivers and other Disney workers, his union did not support the walkout.

“That’s just not the way we are going to go about this,” he said.

“I don’t want to downplay anyone’s efforts, if someone feels what they are doing is the right way to make an impact,” said Eric Clinton, president of Unite Here! Local 362, which represents custodians, housekeepers and other Disney World theme park workers. “We aren’t part of that. It would violate our contract if members of our union participated, though we are concerned about the issue, of course.”

One of the organizers of the walkout, a New York-based employee, said they were expecting participation by workers with the “privilege” to be able to protest to stand up for those who can’t, the employee said. The worker spoke on condition of anonymity out of fear of being targeted online and because organizers didn’t want a single organizer taking the spotlight.

Workers participating in the walkout plan to meet up with each other at locations in Orlando, New York City, Anaheim and Burbank, California, where the company is headquartered.

“Queer employees have been pushing for years to make this company better — it shouldn’t have taken all this for us to get the attention of people up the food chain. Our voices mattered before all this,” organizers tweeted Tuesday.

A Disney spokesman didn’t respond to an email seeking comment. Disney employed 190,000 workers as of last October, with roughly three-quarters working in its theme parks division.

Disney, whose movies and properties shaped generations of children around the world, has spoken out several times in recent years about contentious social and political situations.

It was one of a slew of U.S. companies that in January 2021 said it would suspend political donations to lawmakers who voted against certifying President Joe Biden’s electoral victory. It also spoke out early against a 2016 anti-gay bill in Georgia, threatening to pull its business from the state, which has become a favorite of movie and TV studios. The bill was vetoed by Georgia’s then-governor.

And the company has not been immune to changing societal expectations. It has said it would revamp the Jungle Cruise, Pirates of the Caribbean and Splash Mountain rides at its theme parks to remove racist and sexist elements and put short warnings in front of some of its classic movies on its streaming service, Disney+, alerting viewers to “outdated cultural depictions.”

This time, Chapek, who became CEO in 2020, has drawn fire for speaking out about the gender identity bill only after it passed the Florida Legislature.

Republican lawmakers pushing the Florida legislation had argued that parents, not teachers, should be the ones talking to their children about gender issues during their early formative years.

The legislation attracted scrutiny from Biden, who called it “hateful,” as well as other Democrats who argue it demonizes LGBTQ people. It has been sent to DeSantis, who is expected to sign it into law.

Chapek apologized earlier this month for not coming out more forcefully and publicly against the bill, saying Disney officials had been working behind the scenes to stop it. Chapek also announced a pause to all political donations in Florida and more support for advocacy groups fighting similar legislation in other states. Chapek reiterated those points during a company-wide discussion with employees on Monday.

Disney has long been influential in Florida politics, tending to be conservative and supporting Republicans who have been in control of Tallahassee, the state capital, for two decades, but also being more open on social issues, said Patricia Campos-Medina, co-director of the Worker Institute at Cornell University. “That’s why people felt surprised that they wanted to stay quiet on this issue,” she said.

On a website calling for the walkout, the group says that until the legislation is repealed, Disney leaders need to stop investments in Florida, including the relocation of 2,000 mostly professional jobs from its California headquarters to Orlando. They also say Disney needs to develop an LGBTQ brand similar to the Onyx Collective, an initiative aimed at developing content by and for people of color.

Power, the GOP official in Tallahassee, said he’s confident that Disney and Florida Republicans will get past this flashpoint and restore their relationship, eventually.

“It’s good that we’re pushing back, because the purpose of a publicly traded company is not to push an agenda,” Power said. “The people at Disney know they need to work with the Legislature and the governor, and they’ll come back around.”

Should you invest $1,000 in Walt Disney right now?

Before you consider Walt Disney, you’ll want to hear this.

MarketBeat keeps track of Wall Street’s top-rated and best performing research analysts and the stocks they recommend to their clients on a daily basis. MarketBeat has identified the five stocks that top analysts are quietly whispering to their clients to buy now before the broader market catches on… and Walt Disney wasn’t on the list.

While Walt Disney currently has a “Buy” rating among analysts, top-rated analysts believe these five stocks are better buys.

Companies Mentioned in This Article