The SPDR S&P 500 (NYSE:SPY) was rebounding on Tuesday after printing at least a temporary bottom on Monday. The ETF has swung wildly since late November as the market tries to digest and interpret how the Federal Reserve’s more hawkish stance going into 2022 will affect the stock market.

Fed Chair Jerome Powell began testimony Tuesday before the Senate Banking Committee and pledged to battle rising inflation, even if that means the central bank must hike interest rates higher than previously projected. In December, the Fed said it planned to raise rates three times this year, with the first hike coming as soon as March.

Powell is up for re-election for a second term as Fed chair after navigating the economy through the COVID-19 pandemic over the last two years.

Although higher interest rates can put pressure on companies, especially those that plan to raise capital to expand, Powell’s hawkish tone may help to boost the financial sector as it heads into earnings at the end of this week beginning with JP Morgan Chase & Co (NYSE:JPM) and CitiGroup, Inc (NYSE:C) on Friday. Investors will be paying close attention to how the big banks guide their profitability for 2022.

The SPY is more dependent on the success of big tech companies, however, with Apple, Inc (NASDAQ:AAPL), Microsoft Corporation (NASDAQ:MSFT), Amazon.com, Inc (NASDAQ:AMZN) and Tesla, Inc (NASDAQ:TSLA) remaining the ETF’s largest holdings. For the SPY to hit a new all-time high in 2022, it will first need to make a trend change on the daily chart.

See Also: If You Invested $1,000 In JPMorgan Stock One Year Ago, Here’s How Much You’d Have Now

The SPY Chart: The price action on Tuesday confirmed the SPY may be conforming to an ascending trendline on the daily chart by holding above or wicking from the area on what is now six separate occasions since Oct. 4. The SPY was also printing its second consecutive hammer candlestick, which indicates the ETF could trade higher again on Wednesday.

Traders will be watching as to whether Tuesday’s price action will mark a reversal into an uptrend of if the SPY is about to print a lower high before confirming a downtrend. When the SPY eventually retraces, bullish traders will want it to hold above Monday’s low of day at $456.60, which will cause the SPY to print a higher low and confirm an uptrend.

The SPY regained support of the 50-day simple moving average intraday, which indicates longer-term sentiment has become bullish if the SPY can continue to hold above the level. The next course of action will be for the SPY to regain the eight-day and 21-day exponential moving averages before the eight-day EMA crosses below the 21-day.

The ETF’s relative strength index (RSI) is measuring in at a healthy 50%, which indicates the SPY has room to trade much higher before becoming overbought. When a stock or ETF’s RSI nears 70% it becomes technically overbought, while when an RSI falls toward the 30% level it becomes oversold. 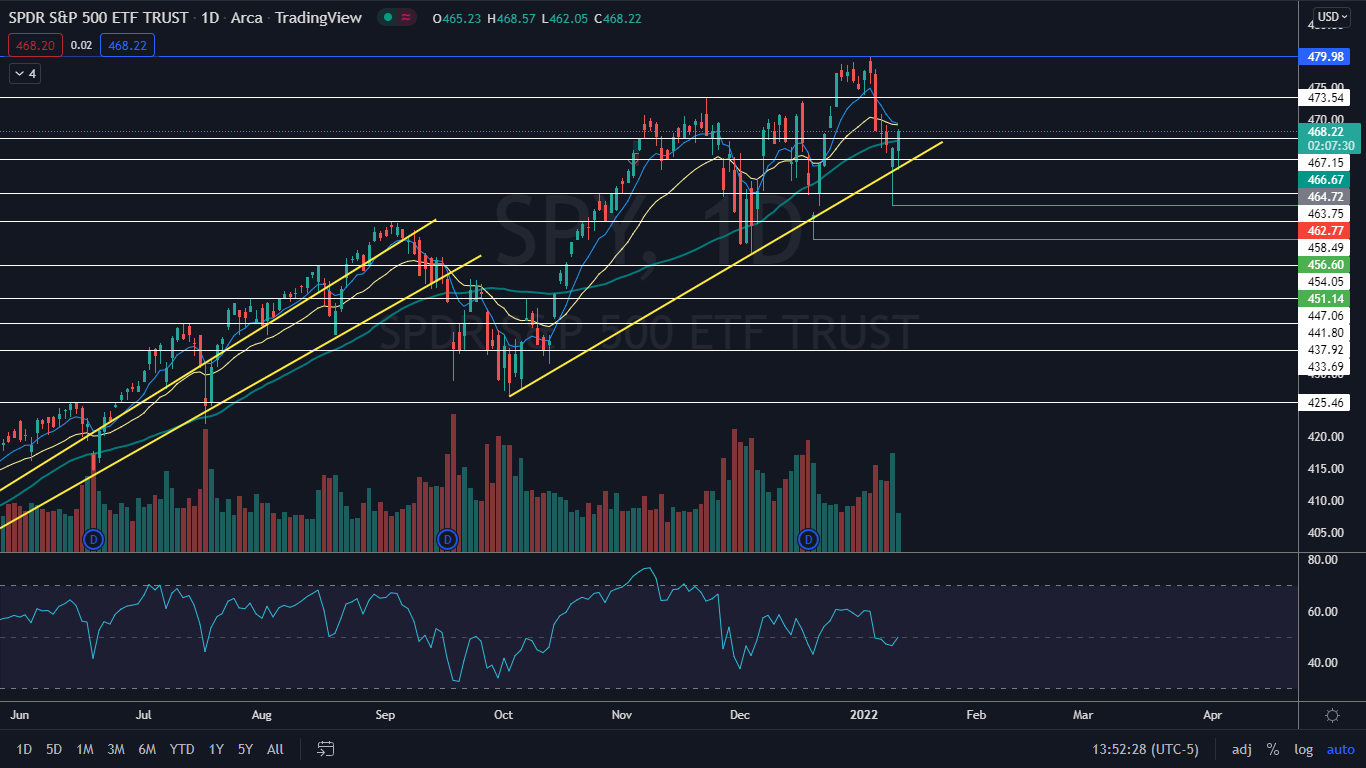