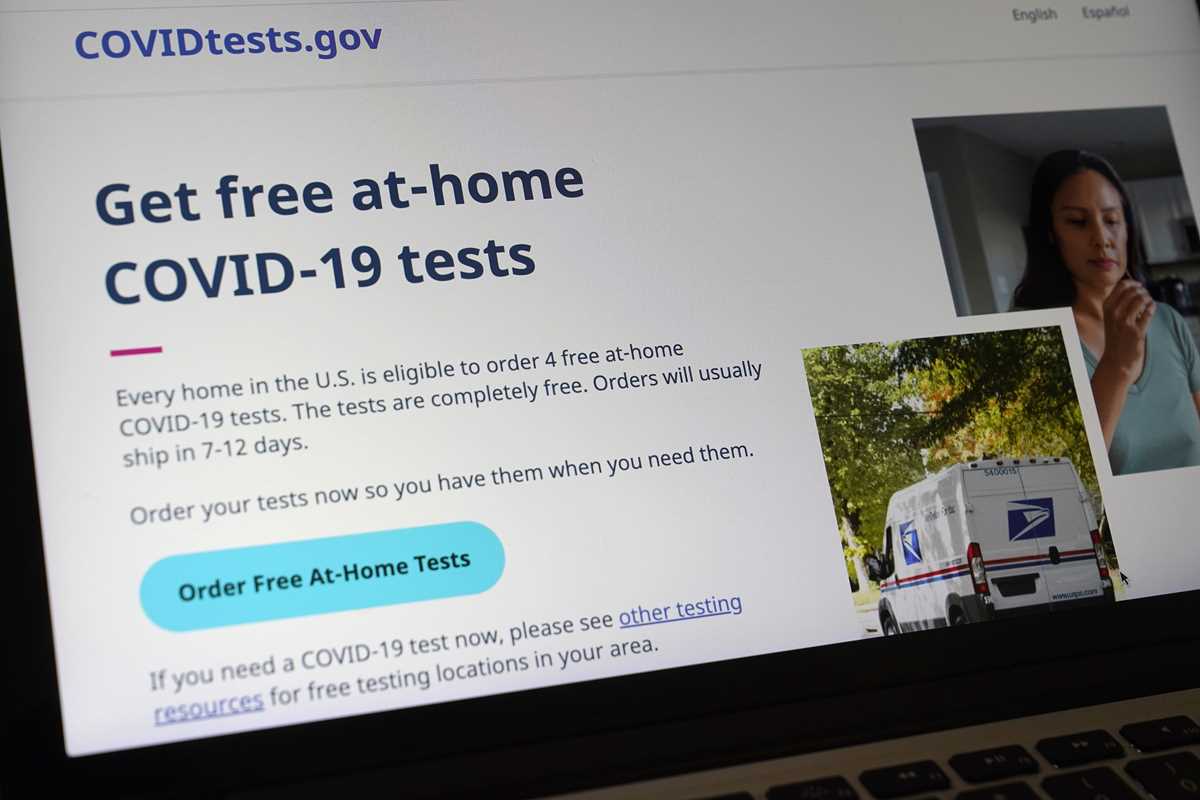 A United States government website is displayed on a computer, Wednesday, Jan. 19, 2022, in Walpole, Mass., that features a page where people can order free, at-home COVID-19 tests. The website, COVIDTests.gov, allows people to order four at-home tests per residence and have them delivered by mail. (AP Photo/Steven Senne)

WASHINGTON (AP) — For the first time, people across the U.S. can log on to a government website and order free, at-home COVID-19 tests. But the White House push may do little to ease the omicron surge, and experts say Washington will have to do a lot more to fix the country’s long-troubled testing system.

The website, COVIDTests.gov, allows people to order four at-home tests per household, regardless of citizenship status, and have them delivered by mail. But the tests won’t arrive for seven to 12 days, after omicron cases are expected to peak in many parts of the country.

The White House also announced Wednesday that it will begin making 400 million N95 masks available for free at pharmacies and community health centers. Both initiatives represent the kind of mass government investments long seen in parts of Europe and Asia, but delayed in the U.S.

Experts say the plan to distribute 1 billion tests is a good first step, but it must become a regular part of the pandemic response. In the same way that it has made vaccines free and plentiful, the government must use its purchasing power to assure a steady test supply, they say.

“The playbook for rapid tests should look exactly like the playbook for vaccines,” said Zoe McLaren, a health economist at the University of Maryland, Baltimore County. “They’re both things that help keep cases down and help keep COVID under control.”

A home test two-pack commonly sells for more than $20 at the store — if you can find one, amid the omicron-triggered rush to get tested. Since last week, insurance companies have been required to cover the cost of up to eight at-home rapid tests bought at drugstores or online retailers.

The government website’s limit of four tests may not go very far in some households.

Kristen Keymont, 30, is a voice and piano teacher who teaches online and shares a house in Ipswich, Massachusetts, with her partner and two other people. When one of her housemates tested positive just before Christmas, she and her partner spent $275 buying more than a dozen tests.

The White House is scared of our country’s lithium supply running out. That’s why Biden issued executive order 14017 to figure out how to expand our lithium production. And this is GREAT news for one company who’s gobbling up land in the lithium-rich Nevada desert.

“One test each is nice, I guess,” she said. “I’m glad we have them, but we’re still going to need to buy more if one of us gets exposed.”

It would be better, she said, if requests were linked to each person rather than each residential address.

Also, some people who live in buildings with multiple units had their requests for tests rejected, with the website saying tests had already been ordered for that address. As those complaints surfaced on social media, people began sharing advice on how to enter apartment or unit numbers in a way that the website would accept them.

The U.S. bungled its initial rollout of government-made COVID-19 tests in the early days of the outbreak and has never really gotten back on track. While private companies are now producing more than 250 million at-home tests per month, that is still not enough to allow most Americans to frequently test themselves.

The Biden administration focused most of its early COVID-19 efforts on rolling out vaccines. As infections fell last spring, demand for testing plummeted and many manufacturers began shutting down plants. Only in September — after the delta surge was in full swing — did the Biden administration announce its first federal contracts designed to jump-start home test production.

Countries like Britain and Germany purchased and distributed billions of the tests soon after they became available last year.

“If you leave the manufacturers to their own devices, they’re just going to respond to what’s happening right now,” said Dr. Amy Karger, a testing specialist at the University of Minnesota Medical School. “And then there’s not a lot of bandwidth if something surprising happens, as it did with omicron.”

Even with government intervention, the U.S. faces a massive testing load because of its population, which is five times larger than Britain’s.

The U.S. would need 2.3 billion tests per month for all teens and adults to test themselves twice per week. That’s more than double the number of at-home tests the administration plans to distribute over several months.

“Congress was willing to put trillions of dollars into infrastructure primarily to improve transportation. This is infrastructure,” said Michaels, a public health professor at George Washington University. “We need billions more in testing to save lives and maintain the economy.”

For now, testing will probably continue to be strained. And even the most bullish proponents say the U.S. will have to carefully weigh where home tests can have the greatest benefit — for instance, by dispensing them to those most vulnerable to the virus.

“The fact is we just don’t have that kind of mass testing capacity in the U.S.” said Dr. Michael Mina, chief science officer for home testing service eMed, who once called for using billions of tests per month to crush the pandemic. “We should now be thinking about how to use these tests in a strategic way. We don’t want to just dilute them out across the population.”

Mina was until recently a professor at Harvard and has informally advised federal officials on testing.

Mina and others acknowledge widespread use of rapid tests is not without its downsides. Results from at-home tests are seldom reported to health authorities, giving an imperfect picture of the spread and size of the pandemic.

More than 2 million test results a day are being reported to U.S. health officials, but nearly all of them come from laboratory-processed tests. Some researchers estimate the real number of daily tests is roughly 5 million, when accounting for at-home ones.

The Associated Press Health and Science Department receives support from the Howard Hughes Medical Institute’s Department of Science Education. The AP is solely responsible for all content.

The manufacturing industry was one of the hardest hits in 2020. In the initial months of the coronavirus pandemic, many companies were forced to shutter operations. However, opportunistic investors kept their eye on several of these companies as recovery stocks. And at the beginning of 2021, the emergence of several vaccines allowed businesses to reopen.  Not surprisingly, manufacturing stocks were among the biggest winners.

But where are these stocks headed in 2022? In December, American manufacturers reported their slowest pace of growth in 11 months. A closely followed index of U.S.-based manufacturers dropped to 58.7% in the final month of 2021. This was slightly lower than the 61.1% in November according to the Institute for Supply Management.

Still, any number of above 50% signals expansion. And the number is only slightly below the 60% level that signifies exceptional growth.

Ironically, it’s the virus that continues to provide a headwind. Supply chains are unwinding but not nearly fast enough to prevent material shortages. The controversy surrounding vaccine mandates is causing labor shortages.

However, there’s a strong likelihood that manufacturing stocks will have a strong year in 2022. And even if they don’t, many of these stocks pay a reliable dividend. That’s why we’ve put together this special presentation on the manufacturing stocks that will overcome current difficulties.

View the “7 Manufacturing Stocks That Will Overcome Current Difficulties”.