It’s been a busy morning around the US Dollar as yet another strong inflation print has hit the tape. This morning saw December CPI print at a whopping 7%, setting yet another fresh 39-year high on that data point.

But – this is right where the market had expected the data to print. And in response the US Dollar has put in an aggressive move of weakness very quickly, helped along by Chair Powell’s somewhat dovish commentary yesterday in front of Congress for his nomination hearings.

As markets gear up for more and more rate hikes out of the Fed, expectations have shifted quite a bit; to the degree that even a 7% inflation print can’t evoke much more of a hawkish expectation from market participants.

But, this story around inflation isn’t yet over, as can be gleamed from the below chart of inflation data over the past five years. 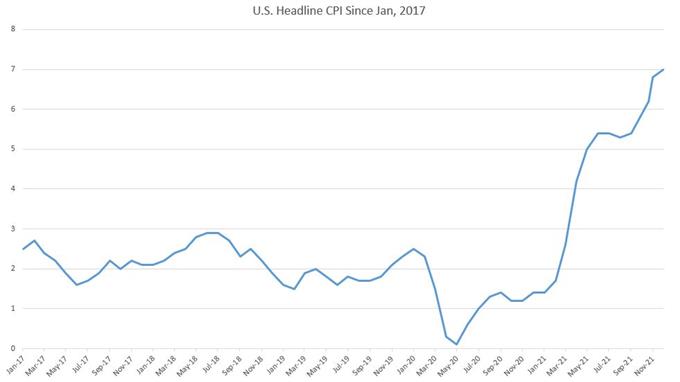 US Dollar: Oversold on H4

I talked about the descending triangle in the US Dollar yesterday. Today, that formation filled in with a bearish breakdown.

The US Dollar has quickly moved into oversold territory via RSI on the four-hour chart. And, keep in mind those expectations for a more-hawkish Fed this year, with the median expectation now showing four hikes, beyond the 2-3 that the Fed had talked about at the December rate decision.

At this point, selling the Greenback could be a challenge given how quickly this move has priced-in. And there may be a case for reversal scenarios, which I’ll look at below.

The mirror image of that descending triangle on the US Dollar above is the ascending triangle formation showing in the major of EUR/USD. I published an article on that setup on Monday, highlighting the bullish potential in the pair, at least short-term, ahead of today’s inflation print.

Now that the breakout has went down, the question is where that next spot of resistance might show up. On my chart, the zone from 1.1448-1.1500 feels key, although this is probably already widely known. The prior swing-low before last year’s breakdown tested below this zone is around 1.1529, and that prior spot of support can remain as near-term resistance potential.

My favored avenue for USD-weakness scenarios has been GBP/USD.

The pair was threatening invalidation of a bull flag formation in early-December, showing up around a key spot of confluence on the chart. But, a BoE rate hike helped in the middle of last month and since then bulls have been on the prowl.

Yesterday saw the resistance side of the bull flag tested through, and today has seen an even greater push from buyers as that topside trend extends.

While the market is overbought from a variety of vantage points, I talked about a few different ways of handling such matters in yesterday’s webinar.

USD/JPY set a fresh multi-year high just last week, but there’s been a minimum of follow-through in that theme with prices pulling back to 115.00 support yesterday.

In yesterday’s webinar I highlighted a rising wedge formation – often followed with the aim of bearish breakdowns. The support side of that formation is growing near, and just below is a significant spot of support at the 114.00 handle.

Given the recency of this counter-trend move, traders might rightfully want to wait for some confirmation before looking to fade what was previously one of the more consistent trends. But, a bearish breach below 114.00 starts to open the door to deeper reversal prospects in the pair.