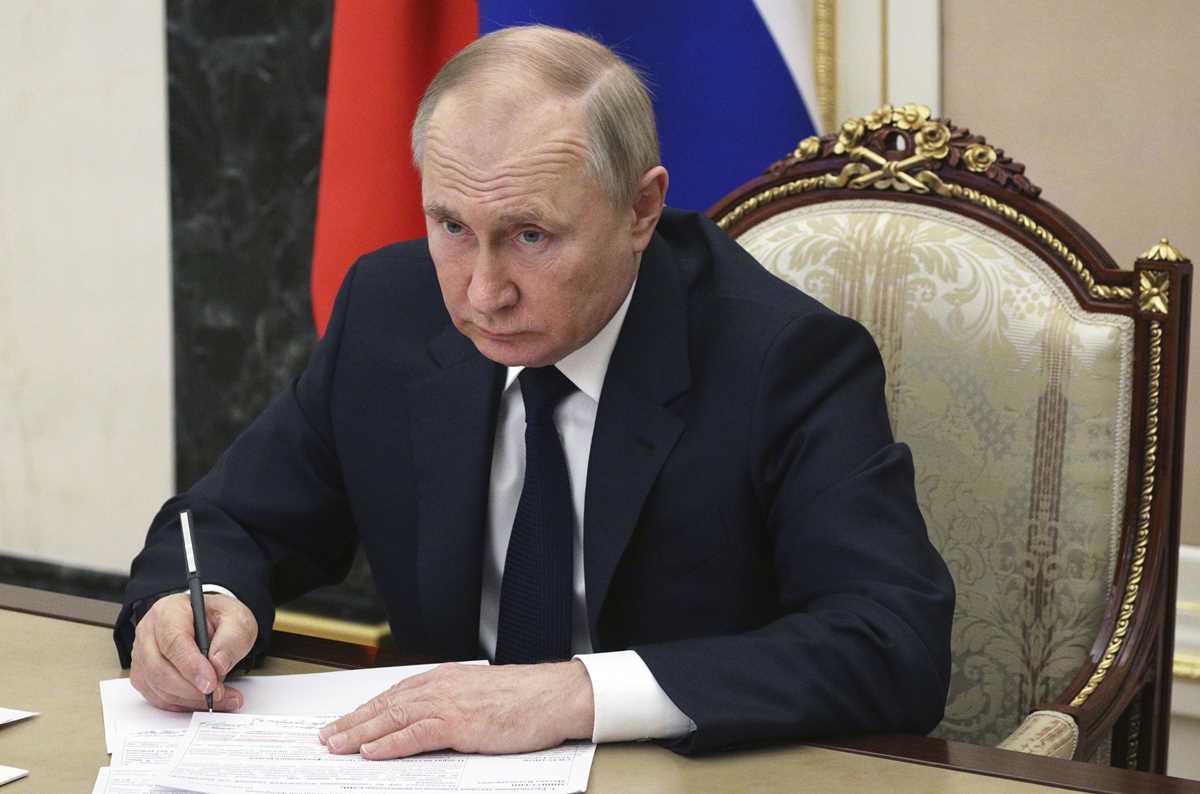 WASHINGTON (AP) — The U.S. and Ukraine have knocked back Russian President Vladimir Putin’s efforts to falsely frame the narrative of his brutal war, but they are struggling to get a more accurate view of the Kremlin’s invasion in front of the Russian people.

While the Russian military suffers thousands of deaths and fails to capture key cities, Putin is intensifying his two-decade crackdown on information. The Kremlin has shut down Russia’s last three independent media outlets, barred major social media platforms, created new laws against journalists who defy its propaganda and insisted on calling the war a “special military operation.”

The result is a Russian public with little to no access to any alternative to Putin’s own anti-Ukraine, anti-Western narrative. It’s a heat shield for Putin against any backlash to the war and Western sanctions that have crippled Russia’s economy.

Breaking through Putin’s propaganda bubble is a key strategic goal for Ukraine and its Western allies. They have tried a series of actions, overt and subtle, to reach ordinary Russians, from encouraging the use of software that circumvents internet blocks to having government briefings for TikTok influencers. The hope is independent voices still operating in Russia, those from the West, and direct pleas from Ukrainians can convince the masses that they’re being lied to about the war next door.

The question is no longer “what we do to stop disinformation,” former U.S. ambassador to Russia Michael McFaul said, it’s how to promote information inside Russia. “Very hard question,” he added.

Among the most important steps, he said, is to “fund Russian independent media working outside of Russia.”

The Associated Press spoke to half a dozen current and former officials in the U.S. and Ukraine about the challenge. American officials acknowledged that any direct rebuttals of Russian disinformation could be quickly dismissed by Moscow as American propaganda.

Instead, they said, the Biden administration is trying to foster the flow of outside information and make it easier for ordinary Russians to learn the truth about the war themselves. The officials spoke on condition of anonymity to discuss internal strategy.

Many Western companies have stopped doing business in Russia. Quietly, though, U.S. officials have encouraged internet service providers to stay, calculating that Russians need to have the means to find outside information online. Celebrities already well-known in Russia, like Arnold Schwarzenegger, have used Twitter and Telegram to share messages and videos speaking of the atrocities of the war.

McFaul called the Schwarzenegger bit “brilliant,” adding: “Those kinds of pieces, though, should be happening every day.”

Ukraine has shaped much of the West’s perception of the war with videos and social media posts highlighting Russian attacks on civilians and destruction of Ukrainian neighborhoods. And President Volodymyr Zelenskyy has won admiration around the world for his direct-to-camera speeches that are posted and shared online. Zelenskyy, in his last speech before the invasion pleading for peace, noted, “I know that they won’t show my address on Russian TV.”

The Biden administration has continued to declassify intelligence findings about what it says are Putin’s war plans to undercut his ability to carry them out. The U.S. is also increasing funding for its traditional means of reaching audiences in Eastern Europe, adding $25 million this month for the U.S. Agency for Global Media, which oversees Radio Free Europe/Radio Liberty and Voice of America.

Voice of America posted online instructions on how to access its site using a virtual private network, or VPN, or through other means of circumventing Kremlin barriers. The broadcaster’s internal statistics suggest thousands of Russians are using those methods.

And the White House met recently with influencers on TikTok, a meeting that sparked some eye-rolling but that a handful of participants said they found helpful.

“The idea of having a White House press briefing with TikTokers who are sharing news … it’s a brilliant idea,” said Kahlil Greene, who describes himself on TikTok as a “Gen Z Historian Follow for History and Politics” and has 550,000 followers. “There’s an understanding that TikTok is expansive beyond borders. Some of these people have millions of followers that cross outside of the U.S.”

But TikTok this month barred new uploads and livestreaming from Russia. In a further crackdown Monday, Russia banned Facebook and Instagram entirely. Twitter, meanwhile, has been difficult for Russians to access. The Kremlin also suspended the BBC Russian service, German broadcaster Deutsche Welle and Latvia-based website Meduza. And, on Tuesday, international news channel Euronews said it had been blocked from broadcasting in Russia.

Some social media platforms and news organizations have worked around the bans and government surveillance, using a privacy-protected “onion” service. Russian users can access a version of Twitte r if they download the Tor browser, which allows people to access sites on what is also referred to as the “dark web.” Instead of .com, onion sites have a .onion suffix. The Russian authorities have had some success blocking those sites, however, too.

It’s hard to measure whether any of those efforts are working, but research done in other nations shows that these type of barriers to information make it just hard enough to deter people from persevering.

“It’s not impossible to jump the great firewall,” said Shelby Grossman, a research scholar at the Stanford Internet Observatory on Russian disinformation on social media. “But the fact that you have to install a VPN to do it could deter people. These tiny frictions have real effects on people.”

Another problem is reaching those who don’t want to be reached, which is also an issue for Americans. Millions in the U.S., for example, wrongly believe the 2020 election was stolen despite an untold number of efforts to debunk falsehoods about voter fraud.

It’s a misinformation environment that the Kremlin relishes, and has helped promote with influence operations against Russia’s adversaries.

Russian state media continues to echo false and unsupported claims about Ukraine’s government and alleges that it requires “de-Nazification.” It has lied about the Russian military’s attacks on civilian targets and its destruction of entire neighborhoods.

Thomas Rid, a professor at Johns Hopkins University and expert on disinformation, noted that the U.S. “doesn’t really have a great track record” on countering false narratives.

“The way I would play this is via Ukraine,” he said. “It has the proximity, the language skills, the family links. We need to help them first and foremost to win and retain access to information.”

Zelenskyy came to the presidency with skills well-suited for an information war. He was a showman who played a president on television and founded a successful production company. Shortly after he took office, Ukraine became the focus of former President Donald Trump’s first impeachment, an international story that ended up giving Zelenskyy’s team valuable training for global information challenges.

Ukraine also has three decades of history as a former Soviet republic that has long had to defend against Moscow’s political influence campaigns and cyberattacks.

“We have way more experience and way more practice,” said Igor Novikov, an expert on information tactics who served as a Zelenskyy campaign adviser and remains close to members of the president’s inner circle. On some aspects of countering disinformation, Novikov said, “the U.S. is five years behind us.”

Novikov said he believes celebrities already respected in Russia, like Schwarzenegger, and people trained on how to talk to their relatives will have more success than sending mass text messages or using other less tailored tactics.

“When you’re dealing with somebody that’s been dealing with an alternate reality, it’s a bit like working to plant a conspiracy theory in a good way,” Novikov said. “You need to break the bubble with trust and choice.”

How should you be investing in 2022? It’s a near certainty that the Fed will continue to pursue a more hawkish monetary policy for the rest of 2022. And right now the market is expecting interest rate increases to start in March 2022.

The thought that the Fed will take aggressive measures to combat inflation is still weighing on growth-minded investors? After all, stocks still look like the place to be.

If you’re an investor looking to maximize your growth this year, you should first make sure you have a base of blue-chip stocks. These stocks can deliver solid returns no matter how the broader market goes. However, after that, you should still have your eyes on growth. And mid-cap stocks may be just the place to look.

Mid-cap stocks are defined by companies with a market capitalization between $2 billion and $10 billion. These companies are still in the growth phase so they’re putting their profits to work in growing their business.

The recent market sell-off has put many of these stocks at attractive points. And while many of them still don’t qualify as oversold by technical measures, they are offering significant upside at their current price points.

At some point the Fed is likely to get serious about whipping inflation. When it does, investors will become even more selective than they already are. By investing in these mid-cap stocks, you can stay one step ahead of whatever comes next.

View the “7 Mid-Cap Stocks to Buy For When the Fed Gets Serious”.